Two years and a few drinks

Last Saturday, I found myself at Shangrila to watch the 5th Annual Silent Film Fest. Razorback was chosen by the Italian Embassy to do the live musical score for the silent movie they were to present. 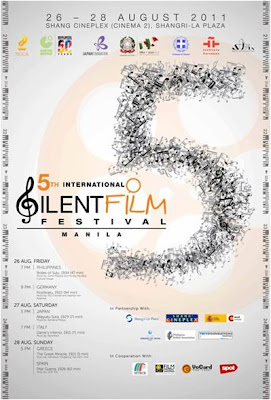 After rushing to Shangrila all the way from Paranaque amidst the rain and the traffic, we finally got there at around 6:30. I did not expect to see the queue so long, good thing Brian already got our tickets. (again, sorry for being a little late)

When the movie started, It literally gave me chills, grabbed my friend, Lej, out of excitement. It was solid.  The sound was amazing, it gelled so well with the movie. L'Inferno, though obviously old, was a cool film. The effects were simple, yet they worked. My favorite scene was one where Satan was chewing up a dude, it was so funny how the guys legs were just wobbling around while he was supposedly chewing him up. We wondered how in the world Liguoro and his guys were able to think of how to execute this whole project given that they had no templates, examples, or anything at all.
Razorback set up in front, but they were facing the screen, too. All throughout the movie I found myself getting distracted by how Bri played the drums. For the first time, I could see whet he was doing while playing the instrument as opposed to just seeing his head bobbing up and down with the view from the front. Conclusion was: Bri is way hotter when he plays the drums with his back to you. OO, Seksi. 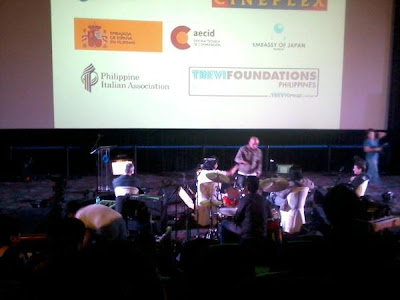 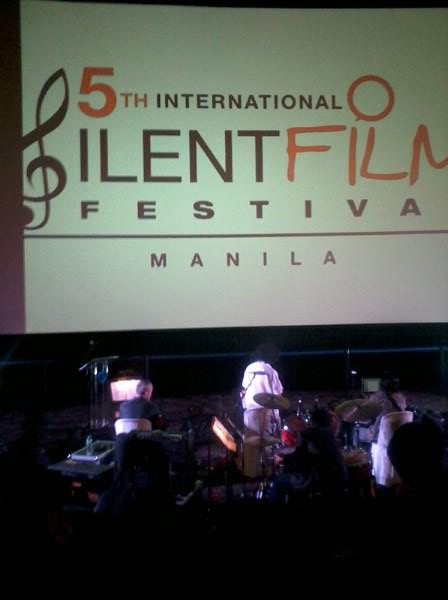 For those of you not familiar, here is info on the movie from Wikipedia:

"L'Inferno is a 1911 silent film by Giuseppe de Liguoro, loosely adapted from Dante's The Divine Comedy.
L'Inferno was first screened in Naples in the Teatro Mercadante on March 10, 1911. The film took over three years to make and was the first full-length Italian feature film ever made. The film was an international success, taking more than $2 million in the United States alone. It is considered by many scholars and fans as being the finest film adaptation of Dante's work to date."

So yes, It was a grand night. A rock concert/movie of sorts. I was hell bent on using the one phrase I learned from my Italian for Dummies audio books. Though opportunity did not present itself that night (I didn't want to harass the Italian Ambassador), it's still very much applicable: Molto bene! Grazie!
at 12:18 AM No comments:

Essence, essence! That's what we look for isn't it? In life, in love, in people, in everything?


And most importantly, in ourselves?


Aside from existing, don't we all strive within ourselves to find a certain level of meaning, of purpose, of reason? Is it enough to live a life fully, albeit one without essence? However, having lived that one and precious life fully and without regret, will we not have exhausted our purpose, and therefore created essence within ourselves?

Musings from a mind aiming to find something to make her existence meaningful and unique. Now, these thoughts and words are the nearest I have to reason.
at 11:15 PM No comments:

What is it with people's need to be known and noticed? Knowing what is true is hard enough, need we make a spectacle of ourselves clawing our way into our own nirvanas?


Regarding certain doubts about my writing, I find that the only solution would be a cliche: Be true to yourself.
at 2:35 PM No comments:

Hey guys! Check out my new post for When In Manila about that Razorback gig I went to. Much love!

Razorback: Your Dose of Rock in Manila
at 12:44 AM No comments:

Email ThisBlogThis!Share to TwitterShare to FacebookShare to Pinterest
Involves: Razorback

The weekend that was

So many things happened last week. We had the Mellow Listeners Party, Razorback gig, but most especially, I passed my Algebra class! Yay for me!
S&M Party was something. Mellow DJ’s were there, with DJ Chris and DJ Chloe attempting to pole dance at some point. Lingerie show and also pole dancers, epic!

The party was held at Amber which is a pretty cool place. It’s composed of two levels, the upstairs or the VIP, which served as a dressing room for the models and the downstairs common party area. People from Amber are so friendly! Here’s a photo of ate and me.

Saturday, I was at San Mig for Razorback. I still do not understand how they can play for that long, set was almost two hours— I mean I Guitar Hero for 15 mins on the drums and I ‘m exhausted! Here’s a photo of Bri, because, yes, he’s my favorite. B)

Also, we found out this weekend that my sister passed her board exam, she managed to do all this without crying (inside joke). Harharhar. It seems that 99.75 (?) % of UST’s exam takers passed. Wow, Congratulations, guys!
By the way, check out the blog I wrote for When In Manila:http://www.wheninmanila.com/zong-restaurant-quick-and-tasty-chinese-food-in-manila/

"Set your priorities", that's what they always say. Personally, I've always regarded now as a priority.

Long term goals as opposed to that one fleeting, elusive thing I've always craved. Is it time to grow up?
at 1:33 AM 1 comment:

When I was younger I insisted that given the right materials, I could make a guitar.
This is how everything is made in my head.

Thoughts like these, as absurd as they may be, inspire me to DIY. Now, I have succumbed to just doing my own manicure.. 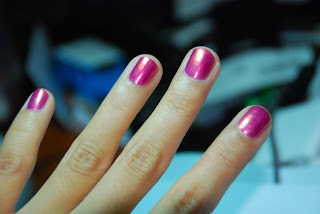 I've never made myself a guitar or a shoe, but I have had a few successful projects.

And a few other things as well. I once made a belt from one leg of an old pair of leggings.

Email ThisBlogThis!Share to TwitterShare to FacebookShare to Pinterest
Involves: DIY

Of Coins and Blogs

See, there are two sides to a coin.

For the longest time, blogs were an outlet. It was a friend I confided in when I felt the lowest of my lows. It was also a friend I left every time I felt a little better, ashamed of what anger or a bad mood had caused me to say. I jumped from one blog to another pouring myself onto virtual paper, one virtual friend after another, without anyone ever finding out.

I am finally making a conscious effort to stand in the middle. Compromise, as I have learned these past few years, is essential. It does not necessarily mean conformity, or losing one's identity, or being (god forbid) boring. Like I said, there are two sides to a coin, but there's always a middle.

I made a little promise to myself. Told myself that I'm gonna be keeping this friend.

School is not cool

It has come to the point where I feel that school is interfering with the life that I think I could be living.
at 12:50 AM No comments: 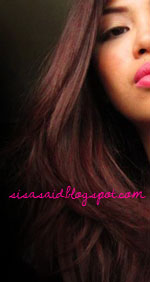